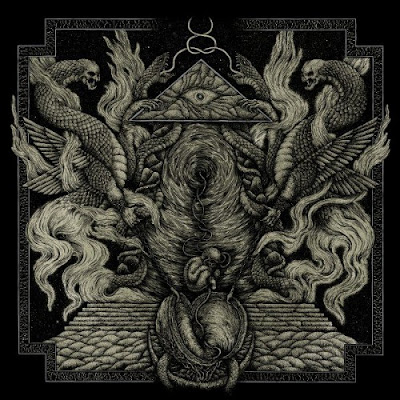 Finnish Vorum released their debut full length "Poisoned Void" early this year and that adds yet another band to the modern old school death metal scene, as if the past is coming back to haunt us all. Formerly known as Haudankaivaja, these guys got together in 2005 with a mission to pay their respects to the roots of the genre. This album is like a finger pointer to the early death metal bands and they are not forgotten or forgiven, and since it's the first full work by the band (along with a poor demo and split w. Vasaeleth), it should be given priority.

No need to mention the awesomeness of the artwork this album has, which is very similar to my favourite pieces in black metal like the covers of Ravencult's Morbid Blood, Watain's Lawless Darkness (and everything), Behexen's Night Emanations and goes on... A perfect cover for the occasion for sure. 8 tracks reach 35 minutes in total length, with average 3-4 minutes songs expect the last self-titled one with lasts 7. The band has managed to create an album that depicts an amalgamation of different death metal styles of the 90s, moving from the American, to the Swedish, to the Finnish scene over and over again. With a sound that's heavy, thick and obscure, gnashing vocals and a shitstorm of riffs and solos, not only do they play something enjoyable to listen to, the very combination of influences results into a somehow unique synthesis.

Most of the tracks are quick-paced and vehement, with some Autopsian doomy riff exceptions, hopefully very few, no more is needed anyway. Every instrument is pleasingly audible and something i admired was the setting of the solos, which are given a clear sound and don't bury or get buried by the rest of the fuss, therefore not losing an ounce of their quality due to the production (check the track Evil Seed to see what i'm talking about, it's one of the best in the album too). The vocals are something between growling and screaming/Sorcery-like shouting, which is expected of them and acceptable as well. There are not any variations of them during the album, but still they are not out of place or weak by any means. It is a crossing between the growls of van Druned and Tardy, if names are needed.

The drumming moves into regular drumming and blastbeats, it is a bit high in volume in the mixing, but not high like it would destroy everything, more likely to improve it, being a great companion and giving a heart beating pace. Each song has a bunch of different riffs to grow around, making it very interesting to listen to, as they are using the not at all worn out recipe that Entombed introduced to the game. Their music is dirty enough to be given an Angelcorpse / Incantation feeling, since it has a raw blackened sound with hammering compositions from the beginning to the end. The songs are not overfilled with ideas and their moderate length helps them to be easy to digest and eventually headbang to, so as a whole, it is a comfortable album.