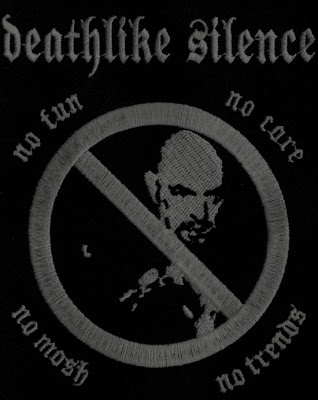 Deathlike Silence Productions is the opening and very important chapter in the history of black metal. It was the first independent label dealing with that weird genre back then, held by one hell of a personality, Euronymous. Either you liked the guy's views or not (I don't, really), he sure helped the genre grow to a certain point in the underground and the immense attention it got later was not his fault. The name of the label was taken from Sodom's Obsessed By Cruelty, if anyone's wondering, and it was formerly named Posercorpse for a short period of time. It all ended precipitously when Eyronymous was murdered and a lot of plans were left in cold waters, but after so many years, I think the incident just adds to it's legacy. Euronymous runned a small store "Helvete" where he would sell Sodom, Kreator, Venom records and merch, along with the label's copies. The attitude of the label was interesting, with anti-Lavey/anti-moshing patches, to anti-Scott Burns pictures on the original back covers of albums. Nine albums were officially released via Deathlike Silence:

Darkthrone threatened Peaceville Records to release their albums with Deathlike Silence, when they changed from death metal to black metal. Mysticum were also signed in Deathlike Silence and would release "Where the Raven Flies" but the label was closed after the death of Euronymous before they managed to do it, leaving them label-less. Monumentum's "In Absentia Christi" was also planned to be released, and Euronymous was thinking to sign Hadez from Peru, Masacre from Colombia and Rotting Christ from Greece. Yay. A Norwegian random music label took over DSP's distribution after it went down, named Voice of Wonder Records.

1990: Merciless - The Awakening
Release number one, sounds as if Sepultura's "Morbid Visions" was remade with more death metal elements in it. Fast, raw, bestial deathrash for all the fans of the underground extreme metal, injecting influences from bands like Possessed, Death, Slayer, Kreator etc... Despite it's short length (less than half an hour), it has some wonderful dynamics and it it considered a classic.

1992: Burzum - Burzum
Varg's debut was made out of a simple formula. The music is easy to play but it has the needed blackness, in which the so called necrosound was adjusted. This used to be my favourite Burzum release even though it might not be the best, but songs like War, Black Spell of Destruction, A Lost Forgotten Sad Spirit, Ea Lord Of The Depths are some of his best. This album is different from his later more primitive efforts, ironically enough.

1993: Mayhem - Deathcrush (Ep)
Originally released in 1987 via Posercorpse, there was a re-release and reprint of this ultra classic record in 1993 through DSP. 25 years later, it seems like a record of evil kids playing around, overusing the word "fuck" and going no deeper than a superficial black/thrash approach to their music. Yet, the songs are nailed to the all-star notice board.

1993: Abruptum - Obscuritatem Advoco Amplectere Me
A lot has been said about this band. It is obscure even for the standards of the genre, it has it's own way of torturing musical instruments into something that eventually drives you insane. To some (Euronymous included), it is the manifestation of evil, the ultimate black/noise punishment, to others it's just random, silly jamming. No music here, you might as well turn violent listening to this.

1993: Burzum - Aske (Ep)
Three tracks and a burned church cover, matches given with every copy of the first print, title meaning Ashes in english... How closer can one get to what was happening back then? Musically, it isn't far from the first album. which means raw vocals and torn out production.

1994: Mayhem - De Mysteriis Dom Sathanas
This might be THE fundamental album here. In terms of ideology and popularity, it always comes up among the very best black metal albums ever and it has some classic riffs by Euronymous (Freezing Moon, From the Dark Past, Pagan Fears, De Mysteriis...). A bit overestimated, if you ask me, but still amazing. I am a mortal, but am I human?

1993: Sigh - Scorn Defeat
I was surprised when I saw that Sigh's debut album was released under this label. The avant-garde metallers from Japan offer a piece of black heaviness along with some smartly played keyboard lines. Diverse, original, colossal. The influences from thrash, doom and older heavy metal are obvious here and there, which explains why their music is not pure black metal, but it is still into that scene.

1994: Enslaved - Vikingligr Veldi
This is my favourite release by DSP. A strong viking feeling and talented musicianship, amazing sound, great synths and lengthy compositions. Even though they stayed away from the activity and the corpse paint, it is one of my favourite albums of the second wave as well, for it's brilliance delivery. It captures an epic feeling and has many interesting ideas, proving that extreme metal was not strictly for satanic purposes.

1994: Abruptum - In Umbra...
Full title goes as: In Umbra Malitiae Ambulabo, In Aeternum In Triumpho Tenebrarum. This time, it is a long 60 minute song (if it can be called a song) full of weird noises and awful, painful screams. I don't believe that the vocalist It was tortured during the recordings as many people say. Even though his voice does sound like someone that is extremely hurt, they probably just stuck him inside a closet away from the microphone.

By VJ-atyc at September 20, 2013
Email ThisBlogThis!Share to TwitterShare to FacebookShare to Pinterest
Labels: Journal