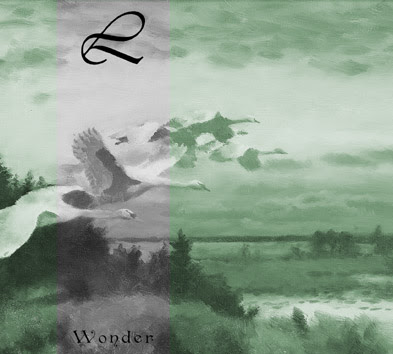 Lustre's fourth full length "Wonder" arrives with nothing new again, continuing with recycled ideas in terms of composition and atmosphere. The new album is very close to its predecessors and there are hardly any changes in the feeling, the structure, the lyrics, the length, everything... Of course, with previous records like these, one would not expect a different pattern since that's what Nachzeit is able to write (not that difficult anyway) and he is not going after daring experiments with his music. I saw the artistic and warm cover of the album and I was positive that I would like it, but I have to say that this was the least interesting album of his to date.

It is proper as a companion to daydreaming, stargazing, walking around, but it it isn't memorable. Instead, it is the same textures, repeated many times. If you have already listened to Lustre, it is like you have heard this album as well. In the previous albums, I always found something new, a previously missing element that he added, like extra samples, or varied synths, even though the main line was identical. With "Wonder", I just feel it's CD2 of "They Awoke to the Scent of Spring", something like rehearsals or unreleased b-sides.

The album consists of four tracks, among them two instrumentals (again). The songs vary from eight to nine minutes, they are slow, droning, isolated. These words will come to mind if someone listens to this for the first time and the first contact with the band, but if anyone has comes across the earlier releases, a view might alter. I can't find a standout track, as they are mediocre even for Lustre's calibre, from the synth melodies to the indistinguishable guitar riffs. Maybe I'm growing bored of this stuff, or it's just that Nachtzeit is releasing the same album again and again until he grows bored of his stuff. The lyrics are very few again, and to "Moonlit Meadow" there is an ounce of poetry.

If this project continues like this, it's possible that everyone will just abandon it, since by now the listeners know what they'll listen exactly. Missing the element of suprise or innovation, the already monotonous music will become more and more frustrating, especially when it's the same on every new album. My advice to the band is, add something in there, anything.