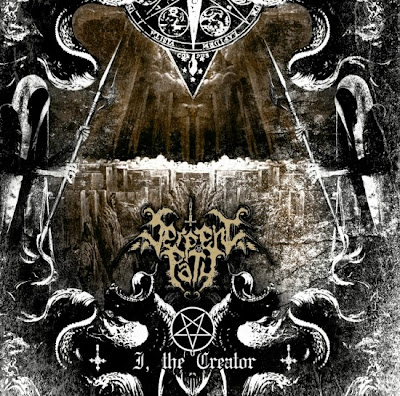 Serpent Path are the fresh meat of the Greek underground scene, a newborn vile creation from the island of Crete. The band hails from Rethimnon and they've been going on as Arsonist Templa for some time before switching to the current name. This is their first release, excluding a demo entitled "Proclamation Of Humanitiy's Decline" that they had recorded under the name Arsonist Templa.

The EP contains four tracks of legit black metal and lasts no less than 22 minutes in total, paying homage to the legends of the genre and showing great potential, being a debut like this. A notable characteristic here is the cover artwork, which owes it's amazing beauty to VisionBlack Designs, who has created both the art of the EP and the logo of the band. If  you expect boisterous noise from this record, you will be startled by the excellent production it has. The tracks have been subjected to professional mixing and mastering, maintaining a cloudless sound that can be considered clean for any metal subgenre. Releasing a dirtless album from the start can only leave a good impression to the listener, since it seems like the band is not fooling around, not eager to quickly release sloppy demos, concentrating on the music itself above all.

The album opens with a seven minute song "When the Wolves Are Silent, Only the Fullmoon Howls", which is the longest in length. With a very short wind sample as an intro, it mostly is Norwegian-driven and has an epic feeling similar to that of Taake or Gorgoroth, filled with interesting ideas and combining fast and slow melodies. The second, self-titled track goes with a middle paced tempo and designates a very powerful chorus, built around a basic riff and slow blast-beating drums. The rhythm of "Religion of Flesh" is the most memorable off the whole EP and the closing song "Manifestation of the Serpent" is relatively fast and agile, compared to the other three. The singer, Horfistt, has done a great job on the vocal part, touching grim and harsh tones with his crumbling voice, reminding of Sakis (Rotting Christ) at some moments. The guitars and the accompanying bass are working great together, whereas the repetitive drums give a steady beat, even though they lack a bit of excitement.

I confidently encourage anyone out there to check this promising act, since their vestal effort deserves attention and feedback. They wisely chose not to follow the easy way of horrible recordings, and exploited their inspiration to the fullest right away. There is talent and still lot's of space for them to improve, so be aware of their following albums in the future.

Track listing:
1. When the Wolves Are Silent, Only the Fullmoon Howls
2. I, the Creator
3. Religion of Flesh
4. Manifestation of the Serpent