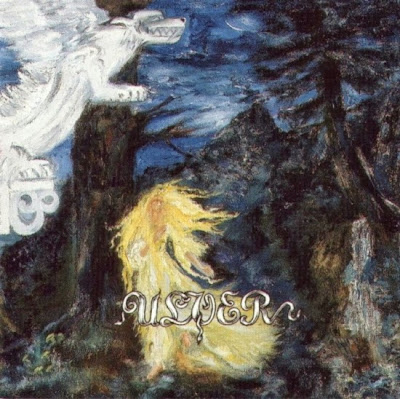 After an engrossing debut, Ulver did not hesitate to experiment even deeper into their soft side, releasing an fully acoustic folk album, based on the acoustic guitars, the vocals, cellos and the flutes. They did not hesitate to experiment from the second album, which is acclaimed by many to be the first dark folk / neofolk record. The language is in Norwegian again and the title means Evening Songs, a convenient description of the musical content, because it is a relaxing, laid back album for the silent hours of the day.

The tracks here are relatively short, most of them lasting between one and three minutes, except the last, Ulvsblakk, which is longer. Seldom are lyrics used and the album is mostly instrumental, except for a couple of lines in some songs and an a capella song, Sielens Sang. Like most artists hate their masterpieces, Ulver were not fully satisfied with this album after all, despite it's grandeur. The vibe of acoustic classical is all over this album, which deliberately eschews from any metal elements to present an arboreal synthesis, very different from anything else that the fans of the extreme metal scene were used to back then. Feeling close to nature and being part of it is a main characteristic here.

The drummer of the band, AiwarikiaR, did not have much to do here, since there is hardly any drumming, but he did participate with the sounds of a flute, and there is no bass used at all, naturally. Garm's sumptuous voice is getting the album a one step higher alone, with incredible baritone chants in the songs, whether there are lyrics or not. It's easier to understand the beauty of the guitar lines and their variations than it was in Bergtatt, even though there too, Haavard had worked on some amazing ideas.

My favourite tracks are Naturmystikk, Høyfjeldsbilde, Kveldssang and Ulvsblakk. Imagine a quiet, silent night among the woods, lightless, away from the modern world. From their first three albums, "Kveldssanger" is the most interesting, yet the least attractive to me, since I prefer heavier stuff in general. Great atmosphere with a great musicianship and enough inspiration from nature, were the sculptors of this one and only record, that many bands imitate these days with modern equipment, but fail to overcome. For it's shape, it was doomed to get a fair amount of haters and people that would not appreciate it, but is innovative and alluring.

DAMAGE: 7.5/10
By VJ-atyc at September 26, 2013
Email ThisBlogThis!Share to TwitterShare to FacebookShare to Pinterest
Labels: Dark Folk, Interesting, Table U, Ulver