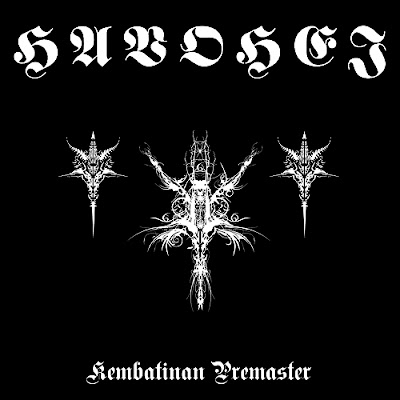 Havohej (Jehovah backwards... Isn't that satanic enough or what) claimed the USBM scene of the early 90s when they released a milestone album "Dethrone the Son of God" in 1993, which is considered one of the most significant records of black metal, it helped the creation of the genre and influenced a lot of bands around. Their blood brothers Profanatica were missing a full length release until 2007, despite being around since 1990, and after they got back on track with their first ever album "Profanatitas De Domonatia", it worked for the second son as well. Havohej released their second full length 16 years after their debut titled "Kembatinan Premaster", and the fans were expecting it with anxiety and desire.

The band is Paul Ledney's project, who is a member of Profanatica, and was a co-founder and drummer of Incantation as well, so he knows his stuff and is pretty experienced. In the early 90s, he became famous for his photos as a nun or naked, as well as the sacrilegious lyrics against God and Christianity in general. After all these years, with such and accepted and promising full length album, the bar was too high already and with two EPs "Tungkat Blood Wand" and "Hornbook Seytan", he gave the world an idea of what was to come. I didn't want to believe it, but something did go horribly wrong. I ignored the signs of disappointment that described these two EPs and aimed straight for this full length when it was released, to get the whole picture.

Paul has changed his prow to a different direction, which is peculiar at a first listen. There are several noise and dark ambient elements in the music that almost describe half the album, the titles of the tracks have changed into industrial-esque ones (i.e. Melancholike) and the whole sound is different. The interesting riffs of the first records, that defined the album's power, are gone. There is no guitar structure at all, instead there is a continuous noisy background glitch that keeps screeching in every song with the same sound. I assume this was done on purpose and was meant to be something primitive and innovative, which to a certain extent is, but in the end, it's just an exhausting buzz inside your head. All these machine noises are down-tuned and distorted to an amount where the clear drum sound is there alone. I can see how he attempted to create a really dark album with minimal and crooked sounds, in a way that it's not exactly black metal anymore, but something else, as noisy and evil, but it didn't work out. The structure of the album is random and the songs jump from part to part without any consistency, meaning that the dark ambient/noise elements with the drumming/vocals/guitar hush (whatever that is anyway) have not been mixed well.

"Kembatinan Premaster" has 8 tracks and lasts 34 minutes and there are tracks that climb up to 7 or 10 minutes in length. That's unusual for this band, which would not surpass 3 minutes of each song in the past, but that has also changed in the name of experimentation. There are some fast songs that remind the early era like Pious Breath, Hatefull Unto God and the opening track, but I feel like the guitar is missing and I can't withstand to listen to them for more than one time. Hopefully, Ledney's vocals have remained unharmed and their sinister sound does add something, the little it can add when the rest of the instruments are not in its favor. There is regular drumming, with fast and middle and slow paced moments, even though he has reduced the variety into the basic drum pattern, probably on purpose again but does sound repetitive and boring. Even the ambient tracks, like the ending of Pious Breath (which is exactly the same as the intro in Melancholike... What was that, a copy-paste sample in Ableton?), the intro of Hatefull to God or the outro, have nothing special at all to offer to the listener. They are pretty much nothing. If you have noticed the wrong spellings of half of the words in the song titles, i did notice it myself and i clearly don't get the reason behind them, they just look hilarious to me.

I'm not comparing the two albums since they are different in many ways. This is not a failure because it is not as good as "Dethrone the Son of God", it is a failure because it fails in production and in composition and that's why I believe it will really appeal to a few people after all. Paul Ledney has a deranged mind and he used it to create a weird album with immense darkness, but he just released a deranged album with little music in it. I can't recommend this to anyone, even though I think 1 out of 20 people will like it for some reason, and if I should really recommend a track for a taste, that would be the 7 minute Bloud Of The Word. It is the only track that has noise samples worth listening to and it is bearable for its length.