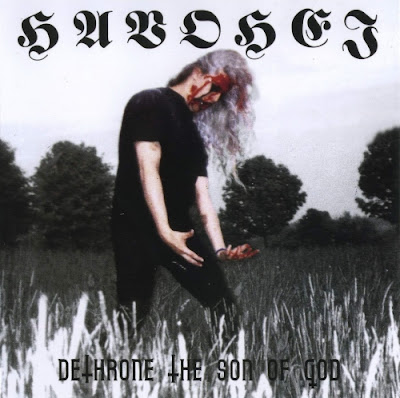 Are you familiar with that type of black or blackened death metal, where being disgustingly blasphemic is a key aspect to the band's attitude? This dirty and unimpressive side of the genre with daring lyrics about anything holy or religious, most of the time just a facete that covers the inability of the bands to play some actual music. Well, Havohej might be one of the most important acts of that area that contributed hell of a lot to its creation.

The band is Paul Ledney's project, who was also involved in Profanatica, if that gives you an idea. Von were around at the time, as well as Blasphemy, but Havohej was something like an unintentional prodigy among them, especially after the release of this album, which is considered and ubercult release by the black metal community. I don't think Paul realized that he put out something that would have such an impact in the underground, at first glance, it seems generic (sloppy front cover, short songs, USBM, hey...). The album has 15 songs and its length is a little below half an hour, which is not that much, especially for this many songs. Albums like this gave the green light to all kinds of hateful youngsters to exploit their puberty by cursing the religion of their annoying parents, it did set the bar low for a shitload of worthless bands to crawl out of their holes release noise, despite the fact that this particularly, is not that easy to reproduce if you listen to it closely. The album is split into two pieces, "Christ Dethroned" which contains the first 5 tracks, and "Burning Paradise" which goes through the rest until the end. The tracks of the first side are Profanatica unreleased/rehearsal tracks, which doesn't matter that much because the two bands had a very similar sound at the time.

These guys are really angry with christianity and you can feel that from the graphic lyrics of the self-titled spoken song, as well as the rest of the tracks and that epic moment when he screams "I vomit on God's child" loudly and clearly, in Weeping In Heaven. The album is famous for it's subject, which is plain and simple, nothing less and nothing more. There is no depth, sophistication or enigmatic concept behind the songs, it was meant to be dirty and it sure is. Of course, the raw production and sound helps a lot to that. There are a lot of catchy riffs in almost every song and they have been mutated with an injection of death metal to sound straight forward and unforgiving. With a bit different vocals and general arrangement, this could be an underground death metal album, but that's just an assumption. Paul Ledney's drumming has a lot of fills between the fast black metal parts and the blastbeats and you can hear some uncommon lines here and there, even though it is high in volume and did blow the rest of the instruments out a couple of times. Some doomier elements can be recognized in songs like "I Arose" too. The vocals are trembling screams, relentless, high pitched yells with a clear sound in terms of how distinguishable the lyrics are, you can actually catch up with the poetic words everywhere.

Only a few tracks reach 2-3 minutes in length. The album's longest track "Once Removed Savior" is one of my favourite in the album since it has all the characteristic of the album, from fast, spitting black metal, to a doomy passage and then a middle paced part. Combined, they describe the whole album. I can't get into the tracks that last less than a minute, as they do sound the same and i would prefer all of them to be full songs or one full song. Other standout tracks are Weeping In Heaven, Heavenly Father, Spilling Holy Blood (which has some killer guitar melodies) and of course, Dethrone the Son of God. I'm questioning the skills of Paul Ledney and the session guitarist John Gelso, because it's not a priority, but they did compose a tight album. I don't see is as a masterpiece as everybody else thinks, it has its imperfections, like the short tracks that are not unique or interesting, as well as the poor production in terms of mixing, not the sound itself. However, there are some notable moments that influenced the scene very much, Havohej have earned the respect of the fans on some level. The guys dressings and lyrics were almost ridiculous, but he made it. Candlelight Records was a success at the time and looking at it today, 20 years later, it looks like a dusty gem of the underground.