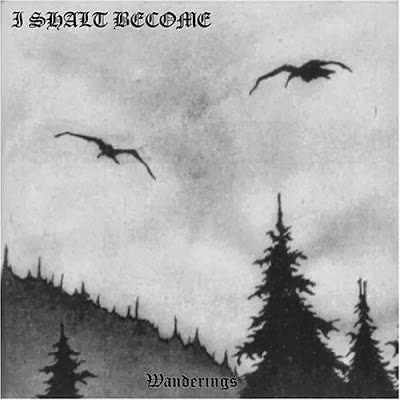 This is the first full length by the american act I Shalt Become and it  stands alone as their only full album from their early period, in the late nineties. It was originally released as a demo tape in 1998, and it has been re-released and re-issued with bonus Burzum/Judas Iscariot covers, as well as unreleased tracks, in 2003 and 2006. There are relations to Burzum when it comes to this release, especially Varg's "Filosofem" (maybe because of the similarity in Burzum covers and this), but to me it's more of a Xasthur-like album, because it reminds a lot of Malefic's sick music, or the other way around.

The album contains eleven tracks and lasts 38 minutes, with an average of 3-4 minutes per song. There is a murky atmosphere throughout the whole album and it dwindles around snail-paced rhythms and simple musicianship. Hopefully, Holliman avoids long compositions, but still the album is somehow repetitive as a whole. The production is sharp and spiteful, leaving an odorless path behind it as it walks, sharing similarities with the sound Xasthur later adopted. Several songs revolve around one or two notes and the drumming is fairly conventional, dilute and in several moments, it just goes unnoticed. It seems like the emphasis has been given on the guitar work, which is still nothing over the top, excluding a pair of cool lines.

Credits need to be given for the vocals, which are predictable but legit, with some obscure screams/howls like in "The Funeral Rain" and "Insects", expressing the ongoing misery and pain on their own. The only moment when the album dares to increase speed is in the song "Labyrinthe", which is faster than the rest, but equally poor in content, focusing on a couple of melodies.

"Wanderings" is rather uninspired, like a failed attempt to copy it's glorious forefathers of the second wave, even though it has a whole kvlt aura around it fifteen years later. I did enjoy it's dim vibe and darkness, coming from a desolate, mourning individual, but with a closer look, it is wounded by imperfections and barely reaches mediocrity. You might find one riff you'll like here, or another that you have heard before, an interesting intro/outro maybe, but the main body is weak.